When the buzzer sounded on Stanford’s championship win over Arizona on April 4, teams and players started pressing send on Twitter. Each shared a highlight video of the sort that might play in a tournament montage. Each tweet carried the same two hashtags: #OurShiningMoment and #OurFairShot.

The first was notable because it marked a new context for the old song: The women’s tournament does not end with “One Shining Moment.” While the championship broadcast does close with a highlight montage, it does not cover the whole tournament and does not have a signature soundtrack, let alone one that is marketed as a cultural touchstone unto itself. This is hardly among the most important differences between men’s and women’s college basketball. But it felt representative of a larger issue: the unwillingness to market or celebrate the women’s game.

The second hashtag, meanwhile, represented something new altogether: Our Fair Shot, a coach-organized initiative, which hopes to keep pushing the discussion about gender inequities in college basketball.

These discussions have been ongoing for decades. But this spring moved them into the spotlight. Both the men’s and women’s tournaments needed to be in COVID-19-safe bubbled environments, which created an unusual and dramatic juxtaposition of facilities and amenities—which were strikingly different.

The NCAA scrambled to address subsequent outrage by improving conditions for the women and agreeing to an external review of “gender equity at its championships” handled by a law firm. The results of that review process should be available this summer. But coaches did not want to stay quiet on the subject while they waited for the next few months to pass. Instead, this seemed like a moment to act—to build on the public support that they felt the sport had landed during the tournament.

Which led the Women’s Basketball Coaches Association to #OurShiningMoment and #OurFairShot: a public campaign that it hopes is just the start of a bigger initiative to draw attention to the differences here and, perhaps more importantly, their ideas about how to fix them.

“Everything that happened in the NCAA tournament—the disparities that we all witnessed that became national headlines—presented an opportunity,” says Toledo head coach and WBCA president Tricia Cullop. “It’s a much larger picture to talk about some of the longstanding disparities.” 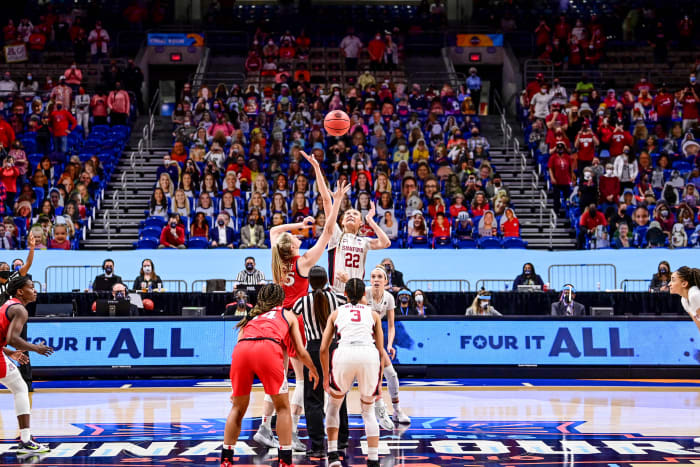 Tip off at the women’s national championship game 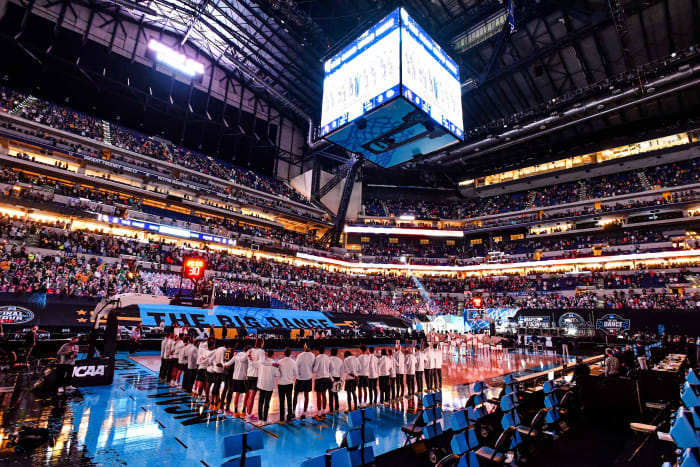 The scene prior to the men’s national championship game

The coaches are primarily concerned with how women’s basketball is structured and marketed—critical subjects, but complicated ones, which can be tricky to sum up in a pithy slogan or package into a viral moment. The tournament, however, provided a glimpse into another kind of disparity: obvious, material differences in conditions that grabbed significant public attention and that they hope will be able to draw interest to more abstract inequities.

“I’m happy in some ways that some of these things came to light,” Cullop says. “So that we can now address them and hopefully come up with solutions. … It’s unfortunate that these things happened, but at the same time, we’re excited to have a lot of eyes on it, so that we can now maybe move the needle.”

The tournament bubbles made for a perfect storm of clarity and timing. The men in Indianapolis were given a fully equipped weight room whose lengthy installation was the subject of a time-lapse video shared by the NCAA. The women in San Antonio had a lone rack of dumbbells and a pile of yoga mats. The men dined on extensive buffet spreads; the women got boxed meals of varying quality. Even the littlest things were different: To occupy their time in the initial mandatory quarantine period, men were given a 500-piece puzzle while women were given a 150-piece. It was all so stark that it was hard to dismiss or try to justify. And, crucially, it was all presented publicly on social media. Stanford performance coach Ali Kershner shared an initial photograph of the weight room. Oregon forward Sedona Prince then went viral with a series of videos about what she was seeing; other players soon joined her in speaking out, and almost immediately, it was a major national story.

The situation was seized on by everyone from NBA stars to U.S. senators. As a result, the NCAA installed a full weight room for the women sooner than had been originally planned, and it expanded the food options. The changes were appreciated. But they did not feel like a substitute for engaging the system that had led to them in the first place: “The outcry was surrounding the symptoms,” Close says, “not the illness.”

It made for a rather discouraging start to a tournament that was supposed to have been historic for women’s basketball—the first time that every game was nationally televised. But some of the initial public outcry turned into general public interest, and the basketball generally rose to the occasion, with tight contests and several big upsets, a triumphant rejoinder to the idea that their game does not have enough parity. An exciting class of freshmen talent headlined marquee matchups. The TV ratings increased and social media engagement spiked. It suggested to the coaches that this might be a moment for them to take—to show the sport’s ability to build an audience and to press for more investment from the NCAA.

“We feel that this is a unique time to continue to push for change,” says WBCA executive director Danielle Donehew. “This specific time period is exciting because of society, because of the conversation, because of the media interest.”

But you could be forgiven for wondering whether this sounds familiar. Women’s college basketball has previously been in situations that were positioned as crucial turning points—like in 2013, when former WNBA president Val Ackerman was tapped to assemble a white paper on the state of the game for the NCAA. Her work identified many of the same points that are still sore spots for women’s basketball today. Yet few concrete changes came of her recommendations. But the coaches maintain that this moment is different from that one: because the example shown in the tournament was so blatant, because the athletes themselves are pushing the subject with their own platforms on social media, and because the broader social context for these conversations has shifted in the last few years.

“I’m so appreciative of the hard work that Val Ackerman did on that,” says Close. “She’s fought for this on so many levels for so long. But was that ever trending on Twitter or Instagram or all over the place like this? And I’m not saying that’s right, or fair, because her efforts have been spectacular. But the reality was that, for whatever reason, people were listening [this March]. People latched on, and their hearts were softer, their ears were bigger, and their eyes were wide open.” 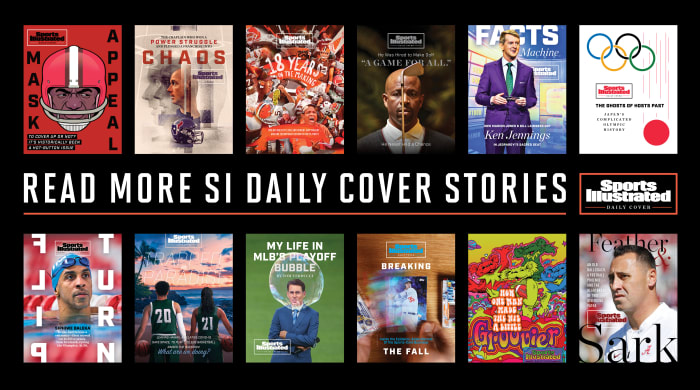 Our Fair Shot’s first step was to publish a guide of what it sees as the inequities between the two games. It’s geared toward eliminating what Cullop calls an “afterthought mentality” for women’s basketball—the tendency for it to not to be taken seriously on its terms. The coaches note that this idea is embedded in the structure of the program: The men’s game is run by senior vice president of basketball Dan Gavitt, who is part of the top management team for NCAA president Mark Emmert, while the women’s is run by vice president of women’s basketball Lynn Holzman, who is subordinate to Gavitt. If Holzman’s role were made part of senior leadership, their game would have “a bigger voice,” says Cullop.

The coaches run down a list of similar points from there. The men’s tournament is often marketed as the tournament, while the women’s is always saddled with a gender qualifier. The men have a tournament app that allows for live streaming and opportunities to monetize content while the women’s app is a basic one, built off a template, with none of the above. The men’s basketball staff is twice the size of the women’s. The men have sponsors for their many various postseason honors and trophies while the women have far fewer—which coaches say is because the NCAA does not prioritize marketing them, and under the current structure, there is no room for women’s basketball’s small staff to push for additional partnerships themselves. (“They’re saying, You don’t bring in as much money; you don’t monetize this,” says Close. “Well, no one sells it!”) In general, the coaches feel that men’s basketball is approached with an eye toward long-term growth while women’s basketball is not afforded the same type of strategic investment.

The NCAA declined to comment on Our Fair Shot or on broader questions of differences between men’s and women’s basketball.

That kind of growth requires structural investment, says T. Bettina Cornwell, head of the marketing department at the University of Oregon’s Lundquist College of Business.

“It is a simple sequence,” Cornwell writes in an email. “Marketing develops fan interest in the sport; interest promotes attendance and viewing; growing audiences support news and media coverage; coverage results in revenues—it is a circular process.”

Under the current system, the coaches say, women’s basketball has its growth artificially limited. They’re not asking to receive the same financial resources as men’s basketball or to follow an identical marketing strategy. But they’re asking for women’s basketball leadership not to be automatically subordinate to men’s basketball leadership and for more opportunities for individuals particularly invested in the women’s game to be able to make decisions about the marketing of their own product. They’re heartened by the growth of their audience in recent years—in particular, their top athletes command sizable followings on social media, more so than many of the men—and they want the structural freedom to build it even more.

“We’re not even asking for exact equality,” says Close. “We’re asking not to be held down by the system.”

This conversation is happening against the backdrop of a larger cultural discussion around equity and inclusion—which could be a natural tool for growing the game. But the NCAA can’t lean into marketing women’s basketball more aggressively if it’s locking players into a subpar system and publicly showing a lack of investment, as it did in March.

“Sport has an opportunity to tap into this social movement toward equality but only if they use marketing in an authentic way,” Cornwell writes. “If sports, leagues, teams, brands and even fans do not genuinely embrace and support women in sport, they will be called out for signaling advocacy without action.”

The WBCA wrote a letter to the NCAA the morning after the national championship to request an opportunity to speak about these subjects. Today, it has its first meeting with the Division I Women’s Basketball Oversight Committee. If it’s become more common in recent years for players to go up against the NCAA, it’s still something of a rarity to see this kind of coordinated action from coaches, particularly so publicly. But Close, Donehew and Cullop—all of whom played college basketball themselves in the 1980s and ’90s—say they’re not looking for a fight. What they’re looking for instead is a partnership.

“This is not an anger thing,” says Close. “This is a let’s fix this thing. Let’s partner together to do what’s right and to make a very important societal shift and make a difference for women in sports.”

• Resilient Cardinal Shaped by a Season on the Road
• Living Nonbinary in a Binary Sports World
• “You Can’t Keep All This Under. You’re Going to Have to Cover It”

Inequities between WCWS, CWS have an effect on gamers, high quality

Inequities between WCWS, CWS have an effect on gamers, high quality

Inequities between WCWS, CWS have an effect on gamers,…